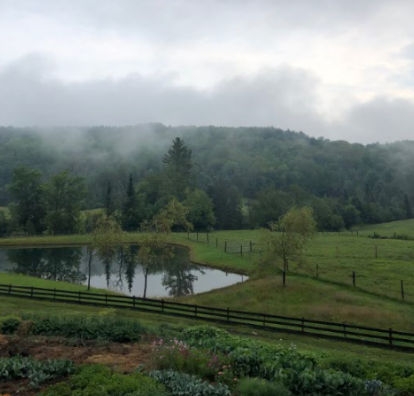 If you’ve ever had the misfortune to attempt communication with a farmer in summer you will know from experience that emails will not be returned, dinner invitations rarely accepted, phone messages left unlistened. You’ll have to go there, to the farm, track down the farmer while she is methodically, insistently, wordlessly working through her day, and talk at her while she labors. If you don’t want to upset her, or if you need something from her, you best grab a fork and shovel the poop alongside her, or grab the fence reel to keep it slack and then taught, or fall to your knees in the warm dirt and start weeding. Summer is not for idol visitors on the farm. Summer -specifically in Vermont- waits for no woman, no man, no beast. It eats up the days and months greedily spilling its warmth and rain over the land. Dishing life-sustaining nutrients it to snow-wearied beasts, plants, and humans. The farmer can’t stop for a chat.

Just as soon as it begins it feels like it is over. In some parts of Vermont, like the one I’m writing to you from, the last frost is at the tail end of May and the first one can attack as early as mid September. One time in recent memory, unforgivably, it hit at the end of August. We morbidly joke that summer actually only lasts 4 weeks, from July 4th to August 4th. Which is why I’m writing to you about summer, in the first week of September. Finally at a time in the season where I have the luxury of sitting still for 20 minutes to answer 2 emails that have been pending since June. Plus, it’s been raining all morning and the rains are getting a little cold for working straight through.

Summer was fierce here. If you asked me for specifics my eyes would glaze as my mind tried furiously to remember what happened. Though farming is quite physical, it doesn’t make it thoughtless. When rural life is labeled as simple I feel bristly defensive. I’ve never met a more complicated life than the rural one. A life where your heat, your food, your furred and feathered tenants are wholly dependent on you and your labor 365 days a year. That work never stops, it changes daily and with nuance leaving the farmer meticulously planning every morning to use every sunlit hour and by lunch she is frantically problem solving over a harried sandwich as the day never once has gone the way she intended. This year we raised a bigger garden than we ever had, grew more pigs than this land has ever known, and planted our first commercial scale crop. So, summer was fierce, I can’t give you more of a descriptive than that.

We are in the final days of the season here. We have at least 10 days, but probably something closer to 3 weeks before the first frost. I hesitate to write that here, it sounds greedy, immodest, and something akin to bad luck. I’m not superstitious by nature but when it comes to weather and our mortal, futile attempts to control it, I give fully to superstitions, to good luck charms, to a constant deference and humility to the weather gods. No matter the exact date of the impending frost we are already changing gears. Switching our bodies and minds from growing to harvest. The cows are making their penultimate rotation on pastures, the gardens are being emptied of tomatoes, eggplant, peppers, beans, all of the crops that require kinder latitudes to continue. Funneling them from the garden, to baskets, to the large stainless pots, then into jars, and onto cellar shelving.

Each September we wonder if we really can eat a jar of dilly beans every week (we can, we will). Each year some crop goes into the cellar only to rot and mold in the obscurity of a dark and dank corner. Every year not enough of something deemed vital was put away. The animals that we do not carry through to spring are also harvested, specifically here the ducks and the chickens. This year will see our first hemp harvest, along with 450 other farmers in Vermont who are growing the crop for the first time. The hay is all put away, second cut was two weeks ago now. The firewood has been curing for months, inching closer to the house, warming our reluctant and sweaty selves each time we move it. Slowly the farm’s scope narrows. Winter is coming, yes, always, but first fall and so begins the season of putting everything and everyone away before the snow flies.