A YEAR THAT HOLDS WAY MORE THAN FOUR SEASONS

Much like the academic year begins in September and the fiscal year in October and the calendar year in January the farm-in-rural-Vermont year begins in April. Sometimes May depending on weather and snowmelt. If your lucky April. And one time since we’ve lived here it began on March 20th. But that was an anomaly and we try urgently to forget this overly optimistic date. Suffice to say we never know exactly when our year will begin, so we have to be ready when it does. This year it was a late April start and even now at the end of May it still feels like the year hasn’t yet begun. We stand, semi-crouched like horses or men at a racetrack, waiting, quivering in anticipation for nature’s version of a starting gun; the snow melt. Mud Season as it is unofficially and unfondly known. “Spring” by some perspectives. As soon as the snow melts the grass, released from it’s frozen stasis -not dead, just waiting- begins to climb upwards and will -if we do our job well- continue until October. 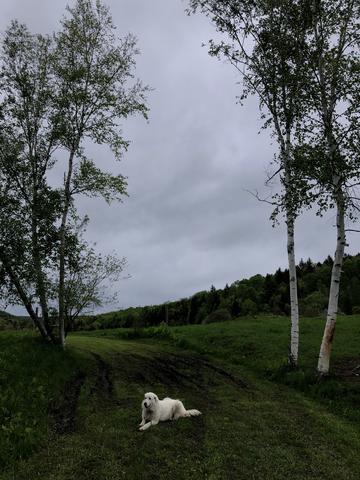 The animals are just as anxious as we. They’ve been confined to the barnyard since the first snow in early November. An earlier winter than most. The snow that fell that day in November was piled upon by more and more until now. When the first pastures began to melt, in the third week of April neither farmer nor beast had seen bare ground since November 5th. Those six months in between then and now were filled for the beasts with hay and rumination. For us they are filled with speculation and planning; a review of the previous season’s mistakes and winnings and intentions for the coming one. The intentions begin wholly optimistic and unrealistic, and then as winter bears on they are whittled down to what we agree we can reasonably accomplish. In January you feel -and fear- that winter is going to last forever, that you have all the time you need to prepare for the next growing season because the growing season will never come. But somehow winter is never long enough and April catches us both anxious and unaware, lulled were we into the long deep winter slumber.

Once the grass begins to grow, once a new season, a new year, has begun, there is little time to stop for reflection and planning. Now is the time for action and movement. The time for building fences, fixing broken stall doors, getting every beast, feathered and hooved out onto the awakened pasture. Once there they never stop moving and neither do we. Everything immediately switches from the anticipation of summer to that of the next and coming winter. Immediately firewood is to be chopped for next year’s fires. Gardens are to be laid out and planted by Memorial Day weekend to take advantage of every last day of frost free weather our bent and cold corner of Vermont provides. Leftover hay is inventoried -it is never more than a few bales, we are always making it through by the slimmest of margins for error. Manure is spread on the hay fields and the machines are checked over, the first cut just a handful of weeks away now.

AVermont is venerated for its dedication to -and showcase of- the four seasons but for us, wholly dependent on the land and the skies the seasons boil down really just to two; winter and not-winter. The former spent dreaming, scheming and meticulously planning for the latter and the latter spent frantically and urgently preparing for the former. Soon we will come into the heat of summer where everything is too sun parched to worry about winter. Those are the days when winter is a hazy memory a distant but also desirous memory. Those are the days when we ache for the quietude of the snowed-in months. But for now, we are here in chaos of Spring. Grateful for the green, and the irrepressible sound of life in pasture and forest and pond.