No sooner had fall arrived then it seemed to have left us. Vermont -while a spectacular, brilliant, shining state in Spring and Fall doesn’t spend too much time with either season. She’s an either/or kind of land, with little interest in middle ground. She’s never paid any mind to solstice dates or other calenderial considerations. This season was no exception. Fall began the last week of August when the first gold of the birch leaves arrived, then the red of sugar maples saw their opportunity. It wasn’t even mid-September before the hills that surround our farm were pathworked in autumn, before the driveway was a tunnel of orange.

Though quick to change color the season was a mild, temperate one for us. Gently guiding us through the final preparations from Pasture to Snow. So gentle was this autumn that we grew complacent. I put off shearing the sheep, planting garlic, prepping the garden beds for next spring. It was a dim, warm, unending, fall. The sort that lulled us into assuming winter would never come. All of October was like this.

Then, as though, uncharacteristically attuned to the date, she ended her autumnal dance with one windy, stormy, rainy finale on Halloween night. It was so mild that night, that despite the downpour, we were warm and pleasant and in good spirits as we accompanied the farm’s resident 6 year old on his trick or treating rounds. We got home by dark and shortly thereafter the winds picked up, the rain intensified.

All through the night the farm shook and the wind screamed. Impossible sleeping for any farmer. I ran through the litany of our beasts, in my mind, over and over, confirming who had shelter, who needed shelter. Had it not felt so violent against our windows I would have gone out there myself, in pajamas, to count all of them. When I can’t sleep I often walk among the animals of the midnight farm. In summer, with the help of a swollen moon. In winter, by the light of the snow blanketed land. But that final October night was too unwelcoming even for an insomniatic farmer such as myself. So I paced and wrung my hands and comforted myself that they all had shelter.

By morning, November had arrived and we had lost 20 degrees and as many trees. Some of the shelters I had held such confidence in the night before were tossed on their ends that morning. Fortunately, there were no farm casualties. The birds looked a bit windblown, feathers pointing in disagreeing directions. The pigs were grumpy, and looking for breakfast. The cows -if they had noticed the storm at all- weren’t giving anything away. The farmers were the most visibly shook. Forecasts and wool hats and insulated boots were scrambled for. Eyes narrowed. Beards grew in earnest. The playground of October was closed. We had 1, maybe 2 weeks before winter arrived. That shot across the bow was all we needed. We got into gear.

Here we are, 11 days later. I can hear the hum of the tractor as I write to you. Nick and Jake are busy getting the final huts bolted down for winter. The final beasts moved into the big barn. There is a dusting of snow on the ground from last week. Barely an inch. I was so certain it would melt as soon as it fell. But the barometer had other plans, and baked it into place with new nighttime lows. We have 8 inches arriving tonight. Single digit lows will follow later this week. She is here. We are here. The winter farm, her beasts and their stewards, are ready. 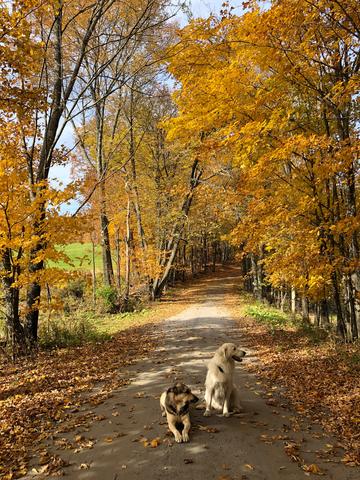